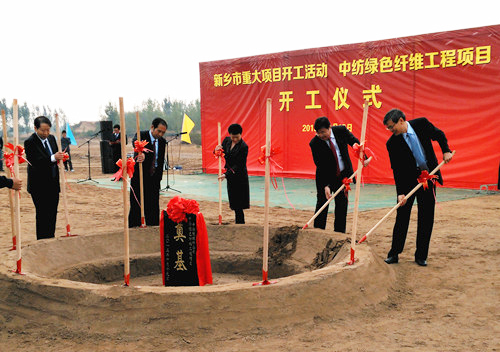 The commencement ceremony was presided over by Wang Yumin, vice mayor of Xinxiang Municipal Government. Zhao Qiang, President of China National Textile Research Institute, conveyed the congratulations of General Manager Li Harin of General Technology Group on the commencement of the Green Fiber Project and the requirements and expectations of completing the project as soon as possible. Mr. Liu Dashan, vice general manager of General Technology Group, expressed his congratulations on the commencement of the project through telecommunications, and proposed the requirements for the next step of work, hoping to build the joint venture into a successful enterprise.

Dean Zhao introduced the situation of the green fiber project, and expressed his congratulations on the commencement of the project, and put forward the requirements of the project construction in the future. He said that the national "textile industry" the 12th five-year "outline of scientific and technological progress" clearly proposed that China should speed up the new solvent method of cellulose fiber industrialization process. After 18 years of research and development, China Textile Institute has formed a complete set of 10,000-ton industrialization technology with independent intellectual property rights, and realized all the localization of core equipment, which is of great significance for breaking the foreign technology monopoly. He pointed out that the smooth progress of the 10,000-ton green fiber industrialization project is due to the strong support of Xinxiang Municipal Party Committee and Municipal Government, as well as the joint cooperation of China Textile Institute, Xinxiang Chemical Fiber and Lanko High-tech. The first phase of the green fiber project, with an investment of 560 million yuan, is expected to achieve a production scale of 15,000 tons by the end of next year, and on this basis, it will gradually form an annual production scale of 100,000 tons. Henan Province, as an important hub to undertake the "One Belt And One Road" strategy, provides a strong condition for the implementation of the "going out" strategy and international industrial layout of the chemical fiber industry in Xinxiang City. The green fiber project will play an important role in helping Xinxiang build regional advantages, actively integrating into the "One Belt And One Road" strategy, and promoting the transformation and upgrading of Xinxiang chemical fiber industry.

Afterwards, President Zhao Qiang and Secretary Shu Qing and other leaders, in the joyous music, held up the golden shovel and laid the foundation for the Green Fiber Project.

China National Textile Research Institute, Gansu Lanke Petrochemical High-tech Equipment Co.,Ltd., and Xinxiang Chemical Fiber Co.,Ltd., jointly invested 400 million yuan to set up the China Textile Institute Green Fiber Co.,Ltd. in early June this year, and started the implementation of the 10,000-ton green Fiber industrialization project. Upon completion of the project, Lyocell fiber will be the leading product. Lyocell fiber uses natural cellulose as raw material, the production process is green and environmentally friendly, and combines the advantages of fiber and natural fiber. Lyocell fiber is an important direction for the development of regenerated cellulose fiber in the future, which can produce good social and economic benefits.

Under the strong care, help and support of leaders and departments at all levels, all staff of the company will scientifically organize, plan and arrange, unite sincerely and work diligently to complete the project construction as soon as possible and achieve the expected goals.